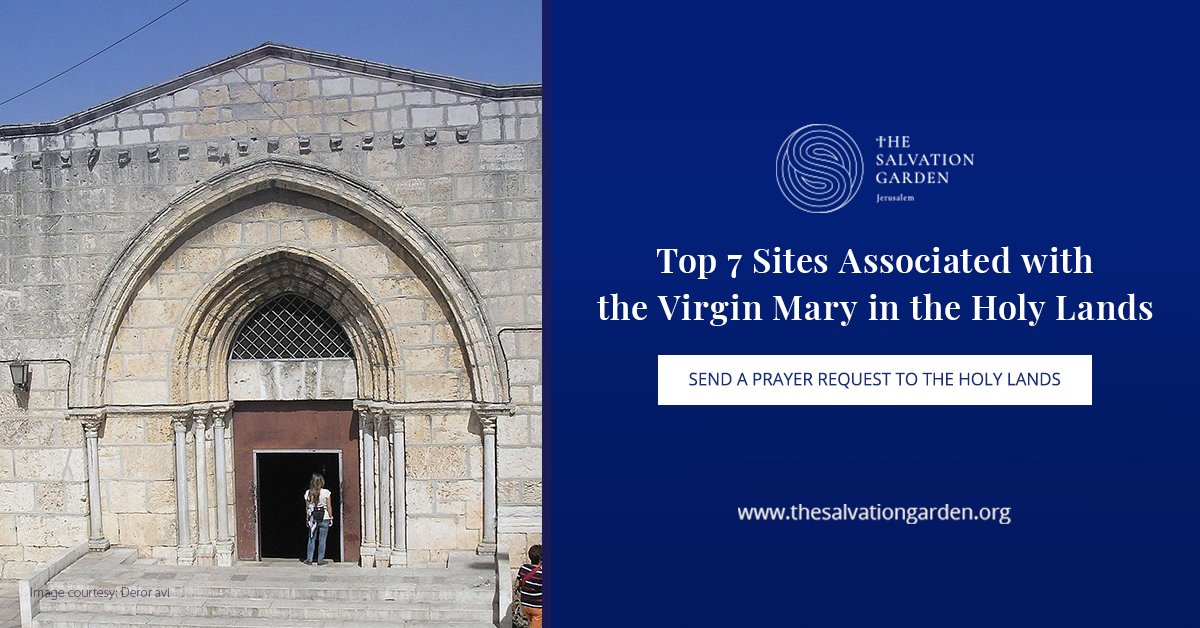 Bethlehem, Galilee, Nazareth, Hebron, and Jerusalem – these are all places associated with the Virgin Mary in the Holy Lands. Christians of all denominations hold Mary, the Mother of God, in high veneration – because of her proximity as the mother to the son of the one true Father, Jesus Christ. Therefore, her intercession in prayer is regarded as the most powerful method of beseeching God to answer your prayers.

1. The Tomb of the Virgin Mary:

The Salvation Garden organizes trips to some of the most famous sites associated with the Madonna. Of these, the most famous one has to be the site of the Dormition – the passing of Mary to heaven once the natural course of her time on earth was over. Team members carry prayers from sponsors to be read out at the Tomb of the Virgin Mary where priests from different denominations unite in celebrating the Assumption. This year, too, we plan to engage in reciting the Hail Mary, the Rosary, consisting of all twenty mysteries, in consonance with the beads of the sacred thread.

The Tomb lies in the Kidron valley, near the foot of the Mount of Olives in Jerusalem.

2. The Abbey of the Dormition:

Located just outside the walls of old Jerusalem, in Mount Zion, the Dormition Abbey is said to have been build under the patronage of John the Second, Bishop of Jerusalem in the early 5the century CE.

This site is well-known for its annual seminars on Theology for priests in training from Austria, Germany, and Switzerland.

3. The Church of the Annunciation:

Clearly demonstrating more Byzantine architecture, this monument marks the site where the angel Gabriel announced the conception and birth of Jesus Christ to a young and virgin, Mary.

This site is located in Nazareth, in Northern Israel.

4. The Church of the Nativity:

The birthplace of Jesus is as much a site dedicated to the baby Jesus, as it is to his mother. The grotto here is one of the most ancient sites of worship that has continuously been used since the time of Emperor Constantine.

Ownership to this important site is aptly divided between the Greek Orthodox, Roman Catholic, Armenian Apostolic, Coptic Orthodox, and the Syrian Orthodox denominations of the Christian faithful.

5. The Ancient Town of Capernaum:

The entire ancient town of Capernaum was uncovered in the early 20th century by the Franciscan fathers who took over the land. This is the place where Jesus was accompanied by Mary and some of Jesus’ earliest disciples to preach his ministry. You can find the original house of St. Peter, the apostle, as well as sites where Jesus performed many of his earliest miracles, such as the healing of the cripple and the healing of the Centurion’s daughter.

You probably didn’t know that Anne and Joachim were the parents of the Saint we now worship as the Blessed Virgin Mary. Built during the time of the Crusades, this site is incredibly well-preserved amid a courtyard full of trees, shrubs, and flowers. Of course, this is also the most likely birthplace of the Virgin Mary.

7. The Orthodox Shrine of the Nativity of Mary:

This site is arguably not the place where Mary was born. However, some religions consider this place to be sacred by virtue of its association with the early life of the Virgin Mary. You will also find that this shrine offers one of the most peaceful prayer destinations in Jerusalem.

As people here are wont to say, ‘Bring a Bible with you and watch the holy lands come to life’. In case you are unable to make it to these pilgrimage sites, we can volunteer to carry your prayers to one of the holiest sites in these lands. All you need to do is sponsor a delegation to make the trip. Check out how this process works today by sending a prayer request online.