Home > Blog > The Stone of the Anointing

The Stone of the Anointing 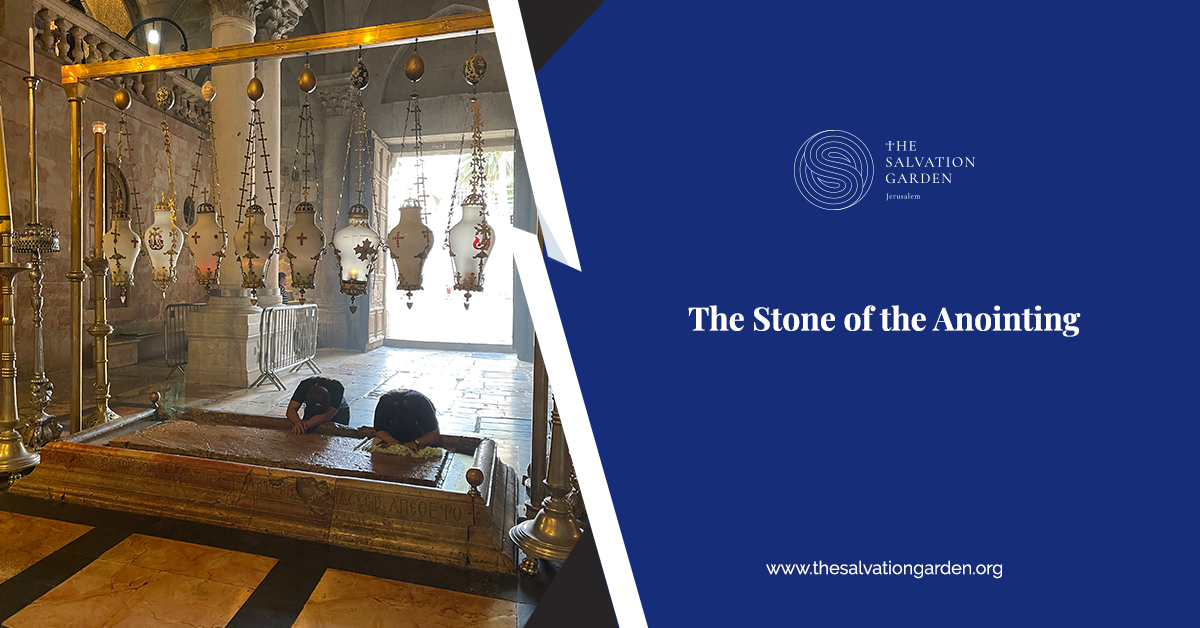 The Stone of the Anointing is also often called the Stone of Unction. It can be found just inside the Church of the Holy Sepulchre in Jerusalem. The Church of the Holy Sepulchre contains the two most holy Christian sites in Jerusalem, Calvary where Jesus was crucified and the Stone of the Anointing where his body was prepared for burial by anointing and being wrapped in cloth.

The Stone of the Anointing is of enormous importance to Christians across the world as it was here that Mary Magdalene was the first person to see the newly risen Jesus. She didn’t realize it was him and thought she was speaking to a stranger when she said:

“They have taken my Lord away, and I don’t know where to find him.”

For Christians, this is the most important event in the history of mankind, as it is when death was conquered by Jesus and from that moment on his believers felt they too could defeat death and experience eternal life. The importance of this event is reflected in the importance of the Stone of the Anointing.

Most historians are in agreement that the Stone of the Anointing is the place where Jesus’ body was prepared for burial. Because of this, the stone itself and the Church of the Holy Sepulchre are very popular destinations for pilgrims and they have been the scenes of some difficult times throughout history.

The Roman Emperor Hadrian didn’t want a site of such significance to be available to Christians, so he built a temple to the goddess Venus over the holy site in the 2nd Century AD. Around 325 AD the Roman empire had its first Christian Emperor, Constantine the Great, who oversaw the replacement of the temple by a church.

In 630 AD this church was damaged by a Persian attack and a difficult history of earthquakes, fires and repairs followed.

The Church of the Holy Sepulchre was totally reconstructed in 1810 and it was at this time that the current Stone of the Anointing was placed where Jesus’ body was prepared for burial.

What people do there today

The Stone of the Anointing remains a very holy pilgrimage site for Christians today. Pilgrims queue to either kiss the stone or rub it with oil or rosewater and then wipe it with a cloth. Priests burn incense around the stone and sometimes people place their own crosses on it in order to transfer the unction or anointing.

Rosewater is used to anoint the Stone of the Anointing because it is a perfume that has traditional use in a number of religions. For example, during Muslim burials rosewater is sprinkled into a grave before burial. Rosewater has in the past been used for the embalming of bodies as it has properties that are good for the skin.

Visitors to the Stone of the Anointing

Over hundreds of years, there have been stories of miracles and cures experienced by people who have visited and anointed the Stone of the Anointing. The atmosphere in the Church of the Sepulchre is one of reverence and worship. This is clearly one of the holiest places and somewhere that each and every one of us should consider visiting during our lifetimes.