Home > Blog > Why Do Christians Celebrate the Feast of St. James the Greater in July

Why Do Christians Celebrate the Feast of St. James the Greater in July 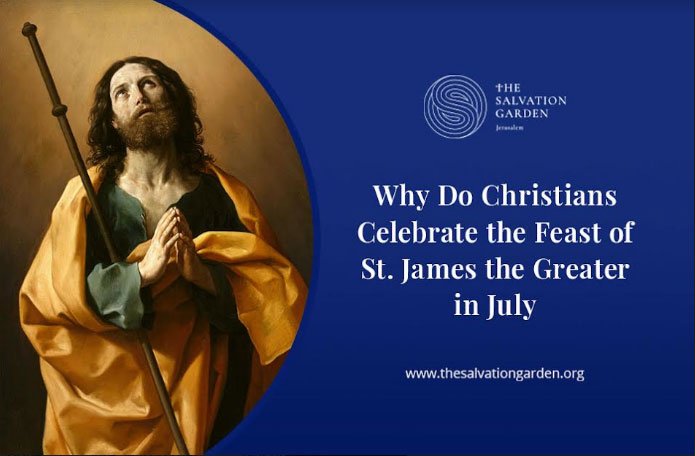 St. James the Greater is remembered on his Feast Day – July 25 – for being the first of Jesus’ twelve apostles to be martyred. But more importantly, he was one of only three witnesses to the Transfiguration – an event that Thomas Aquinas describes as the holiest miracle in all of Christianity because it happened to Jesus himself.

In the words of Matthew:

“After six days Jesus took with him Peter, James and John the brother of James, and led them up a high mountain by themselves. There he was transfigured before them. His face shone like the sun, and his clothes became as white as the light. Just then there appeared before them Moses and Elijah, talking with Jesus.” Matthew 17:1-3

James – the Son of Thunder

St. James along with his brother John, are called “sons of thunder” in the Gospel of Mark, in all probability, referring to their fiery enthusiasm for spreading the word of Jesus. Less spoken about than Saints Peter and John, St. James was, nevertheless, known to be steadfast to the cause when others wavered and committed to the end.

James – Witness to the Transfiguration

Of the Transfiguration, the Gospel of Matthew tells us:

”While he was still speaking, a bright cloud covered them, and a voice from the cloud said, “This is my Son, whom I love; with him I am well pleased. Listen to him!”

“When the disciples heard this, they fell facedown to the ground, terrified. But Jesus came and touched them. “Get up,” he said. “Don’t be afraid.” When they looked up, they saw no one except Jesus.” Matthew 17:5-8

Both theologians and historians believe that the most likely location where this extraordinary event took place is Mount Tabor – an ancient elevation in northern Israel, at the edge of the Plain of Esdraelon in lower Galilee. This hill is also mentioned in the 13th century BC inscriptions of the Pharaoh Rameses the Second. The Old Testament mentions Mount Tabor as the site of the Israeli peoples victory under Barak over the Canaanites, led by Sisera, sometime in the 11th century BC.

Mount Tabor rises above the surrounding plains and other hills as the highest landform for miles around. It bears an impressive hemispherical shape with low brush adorning it. It is not difficult to see why so many important historical events have been associated with this hill.

This picturesque landscape is, today, home to the monthly ‘Miracle Walk’, where pilgrims join together to climb up the hillock and experience the same climb that St. James and his fellow apostles would have made when they bore witness to the Transfiguration of Jesus.

How to Pray for a Miracle at Mount Tabor

You, too, can be a part of these divine experiences by offering prayers for miracles at this site. If, by any chance, you are unable to make this vaunted pilgrimage to the holy lands yourself, The Salvation Garden praying community offers volunteers to undertake the arduous trip on your behalf, and offer any prayers that you may want said. Talk to our facilitators for a holy land prayer request fulfillment today.